In the United States, 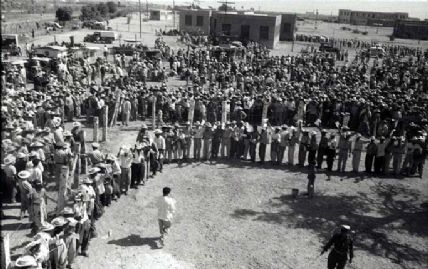 Operation Wetback was enacted in the 1950s by immigration and Naturalization service. The effects of World War 2 caused a massive exodus of Mexican migrants into the U.S through the Rio Grande, into the Southwest part of the United States, to work as farm hands .  It was characterized by massive exploitation, and abuse of Mexican farm workers, by southwest farmers, law enforcement and Immigration agents.  Due to the massive abuse, the Mexican government, in response, in conjunction with the United States enacted a treaty to protect migrant Mexican bracero worker rights (Koestler. Web. 2012).

This agreement did not stop the abuse, despite the Mexican government demand that the united States cease to use all Mexican workers. The United States immigration service with pressure from southwest farmers retaliated by enacting operation wetback, unlawful ceasing, detaining, and deporting any person who looked Mexican. Any deported individuals were not allowed back into the country; this did not stem or prevent the flow and re-entry of Mexican migrant workers in the United States. A 1950 study conducted by the 1950 by the President’s Commission on Migratory Labor in Texas, showed a 6,000 percent increase in migrant labor and a substantial reduction in wage levels around the southwest (Koestler. Web. 2012).

In 1954, before the Operation Wetback began, there were over a million of workers crossed the United States Border illegally. Regardless of the risk of offending United States Laws, labors desired for jobs and opportunities to live better. Agricultural works were mostly replaced by cheap labor from Mexico; however, the massive movement also triggered violation of labor laws. Criminality, disease, and illiteracy were also bought into the country (Koestler. Web. 2012).

The result of Operation Wetback was stunning. Gen. Joseph May Swing, in mid-July 1954, generated a military-related movement to search and capture illegal immigrants from Mexico. Beginning from the Rio Grande Valley, Wetback spread quickly;